Tom Jackson (1991–1995)
Russell Means (Thomas and
the Magic Railroad
)
William "Billy" Twofeathers is the Native American resident railroad engineer on the Indian Valley Railroad and driver of the Rainbow Sun, as well as the handyman at Shining Time Station, who like his predecessor Harry Cupper, has a knack for repairing just about everything.

Billy is a reliable, outspoken and well-grounded individual who is proud of his Lakota heritage and culture. He is a talented artist, singer and guitar/flute player.

In Thomas and the Magic Railroad, Billy knows a lot about railroading and the sense and respect for the magic that surrounds Indian Valley and Shining Time.

Billy arrived to replace Harry Cupper and his cousin Tucker. He became a good friend to the kids (Dan, Kara and Becky) and Stacy Jones.

His grandfather, William Twofeathers also worked at Shining Time Station during its early years. Billy is the uncle of Kit Twofeathers, whose now-deceased father was Billy's brother. Billy is also known to have three uncles.

Billy often helped Stacy and acted as her assistant.

Billy with Dan in The Workshop 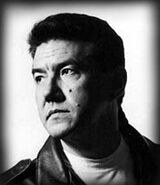