He started acting in the mid-1990's, and was best known for being in  "Not Another Teen Movie", "Big Bully", and Bring It On", with Kirsten Dunst. He currently acts in various TV series and independent films, such as "90210", "Desperate Housewives", "Everwood", "Monk", "Vicious Circle", "10 Things I Hate About You" and "Cold Case".

He played Patch in Thomas and the Magic Railroad. 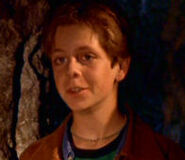 Cody McMains with Lady on the set of Magic Railroad

Retrieved from "https://shiningtimestation.fandom.com/wiki/Cody_McMains?oldid=40461"
Community content is available under CC-BY-SA unless otherwise noted.