She has also appeared in the television movie "Necessary Parties" and the television series "Working It Out". After the show Shining Time Station went off the air and after the family specials aired, Danielle retired from acting. 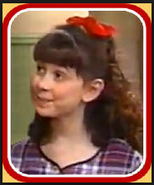