Shining Time Station Wiki
Register
Don't have an account?
Sign In
Advertisement
in: Cast, Crew, Thomas and the Magic Railroad,
and 4 more

Neil Crone (born on May 29, 1960 in Toronto, Ontario, Canada) is a Canadian actor who provided voices for some of the characters in Thomas and the Magic Railroad.

Improvisation partners Neil Crone and Kevin Frank had originally auditioned to voice the trucks. Crone was given the role of Diesel 10 when Britt Allcroft and the producers heard him doing a Russian accent whilst fooling around during the recording of the trucks' lines. The Russian accent was eventually dropped after test audiences claimed that it would be offensive and it was changed to a New Jersey accent in the final version. While fooling around, Frank and Crone were asked to try out for some of the other characters.

Neil Crone would later reprise his role for Gordon in the new reboot for Thomas and Friends: All Engines Go.

Besides voicing many of the characters, Neil Crone and Kevin Frank were also creative consultants for the film and they were asked to add more comedy to the script. It was Neil Crone's idea to name Diesel 10's claw "Pinchy".

He has also appeared in the Canadian sitcom "Really Me" and "Little Mosque on the Praire". 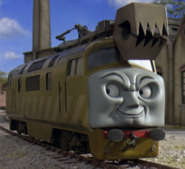