Sir Ringo Starr, MBE (born, Richard Starkey on July 7, 1940 in Dingle, Liverpool, England, UK) is an English musician, singer, songwriter, producer and actor who gained fame as the drummer for The Beatles. He narrated the first and second seasons of Thomas the Tank Engine and Friends. He was the first narrator, and the first actor to play Mr. Conductor in Shining Time Station. He left the show after 1990 to focus on his music career and tour with his All Starr Band though he often praises his work on the show. This could explain the reason the first Mr. Conductor was written out. 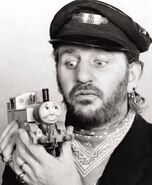 Ringo Starr (as his Mr. Conductor counterpart) with Didi Conn as Stacy Jones 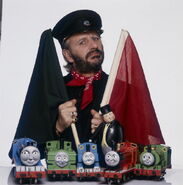