Shining Time Station is a train station that resides on the Indian Valley Railroad and is located in the fictional town of Shining Time.

The station is managed by Stacy Jones, the station manager whose grandmother Gracie ran the station when she was her granddaughter’s age. The station's workshop was run by railroad engineer and mechanic Henry "Harry" Cupper. At the end of the first season, Harry transferred to a new station in Fort Farley and was replaced by his cousin, Tucker Cooper. In the second season, Harry was replaced by Billy Twofeathers, while Mr. Conductor (Ringo Starr) went to the North Pole with Mr. Nicholas and the new Mr. Conductor (the first's cousin) is George Carlin starting in the second season.

A local named Horace Schemer (simply called Schemer by his friends) runs the station's arcade and is always finding new ways to make more money and to protect his arcade. He serves as the series' comic relief. Schemer thinks that strange goings-on in the station happen because the station is haunted. His catchphrases include "Genius time" (for when he has an idea), "Schemer's system of success" (for when he wants to impress his friends) and "This place is haunted". Starting in the second season, Schemer would sometimes be aided in his schemes by his nephew, Schemee.

There is a jukebox inside the arcade that houses a band that performs for the nickels that are dropped inside. The band consists of DiDi the drummer, cowboy twin brothers Tex and Rex who together play between them one guitar larger than them, Grace Bass who plays bass guitar and Tito Swing the leader who plays the piano and collects the nickels they accumulate. They are later joined by their manager, JJ Silvers.

Mr. Conductor is a tiny man who lives in a switch house inside the mural and tells stories of Thomas the Tank Engine to the kids (and sometimes to the adults). He can teleport in a cloud of his magic gold dust.

Originally, the station had no name. One day, Jebediah Schemer was riding his carriage when it got stuck on the railroad tracks after the horses ran away. Gracie Jones managed to warn the approaching train's driver just in time with a signal. The driver was B.J. King and he thanked Gracie, telling her, "I saw your light shining just in time." Kara and Becky thought about the station's name in the future out loud and the station got its name. 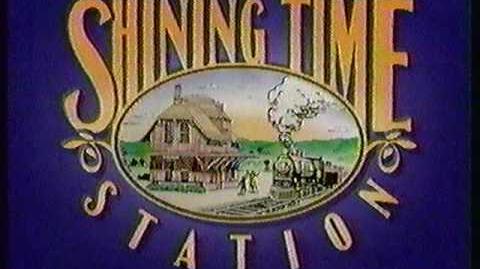