The Meaning of Time

How to Have Good
Table Manners

How to Apologize
The Meaning of Time is an episode of Schemer Presents!, a home video spin-off of Shining Time Station.

The scene opens with Schemer entering his room carrying a freshly baked loaf of bread. It smells so good that he wants to taste it, but is interrupted by the telephone ringing. It's Stacy Jones calling to remind him to bring the loaf of bread to the station within the next five minutes to send to her friend on the next train to Dillylick.

Schemer is distracted and ponders making a Schemer Presents lesson about how to eat bread. He gets so carried away by the idea that he takes a big bite out of the loaf, relishing the taste. He returns his attention to today's topic which is "The Meaning of Time". Schemer's way of explaining time is by demonstrating brief pauses and silence in his actions. Schemer then demonstrates how clocks keep track of time by first using an old fashioned time piece, an hourglass. He takes another bite from the loaf as he "watches your past form into little piles of sand."

Schemer then walks over to his dresser to show the viewer what a modern clock looks like; it has a face and hands. Schemer describes its use in the second part of the lesson about how to make a schedule. He explains that a schedule is a "timey" list of things to do, and begins to check off what he's accomplished so far: 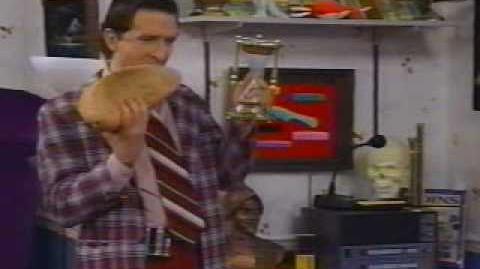 Schemer Presents - The Meaning of Time
Add a photo to this gallery
Retrieved from "https://shiningtimestation.fandom.com/wiki/The_Meaning_of_Time?oldid=48525"
Community content is available under CC-BY-SA unless otherwise noted.