The Rat Pack was the puppet band in Schemer's new jukebox in Once Upon a Time. 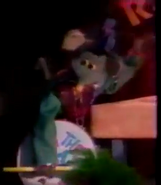 A random rat who appears between Kitten and Dorian. He may be a manager of the Rat Pack.

A logo for the Rat Pack, which appears on Ruff's drum.
Add a photo to this gallery
Retrieved from "https://shiningtimestation.fandom.com/wiki/The_Rat_Pack?oldid=49384"
Community content is available under CC-BY-SA unless otherwise noted.